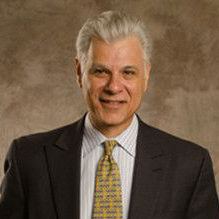 José Roberto (Beto) Juárez Jr., is dean of NSU Shepard Broad College of Law. Dean Juárez serves as the chief academic and administrative officer of the college of law, working with a diverse community of faculty, students, staff, and alumni to continue to develop the college as a premier learning community focused on what students need to practice law in the complex, modern workplace. Prior to joining NSU Law in 2020, Dean Juárez was a tenured professor of law and director of the Lawyering in Spanish program at the University of Denver Sturm College of Law. He served as dean of Denver Law from 2006 to 2009. Prior to 2006, Dean Juárez was associate dean for academic and student affairs and professor of law at St. Mary’s University School of Law in San Antonio, Texas.

Dean Juárez has taught courses in Civil Procedure, Employment Discrimination, Civil Rights, Conflict of Laws, Federal Courts, Professional Responsibility, and Remedies, as well as a seminar on Language Rights. His research interests include employment discrimination, language rights, legal history, race, and religion and the law, and he has published extensively, presenting his work throughout the United States and Mexico. Dean Juárez served as a Visiting Professor of Law at the University of Oregon Law School during the 2001-2002 academic year and was an associate professor of law at the Council on Legal Educational Opportunity Institute at the University of Missouri-Columbia School of Law during the Summer of 1991. He began his career as a staff attorney for the Gulf Coast Legal Foundation in Galveston, Texas, where he practiced poverty law, with an emphasis on family and housing law; he then moved to the Mexican American Legal Defense and Educational Fund (MALDEF), a civil rights law firm, as a staff attorney in their San Antonio office. After four years, he was named MALDEF’s Regional Counsel and Employment Program Director in their Los Angeles office, where he supervised a staff of 13, including five attorneys. He also supervised employment discrimination litigation brought by attorneys in five regional offices nationwide.

Juárez earned an A.B. degree in History from Stanford University and a J.D. from the University of Texas School of Law in 1981. Dean Juárez also co-founded the Deans’ Diversity Council and the non-profit organization spun off from the Council: The Center for Legal Inclusiveness. He is currently serving a second term as Co-President of the Society of American Law Teachers (SALT), one of the largest organizations of law professors in the United States. He also chaired the Board of Directors of the Journal of Law and Religion, and its successor, the Council on Religion and the Law, and served on these boards from 2002 - 2020.