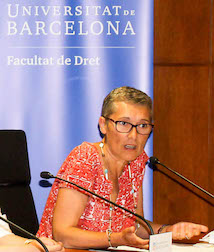 Dra. Mar Campins i Eritja is a full Professor of Public International Law and EU Law at Universitat de Barcelona (UB). Her main areas of teaching and research are EU Law and European and International Environmental Law, with a focus on climate change international regime. She has led and participated in various competitive research projects and published several articles and monographies in these areas.