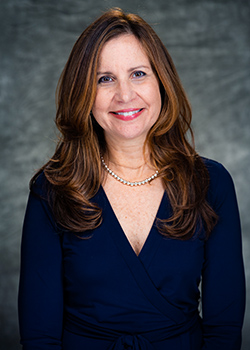 Catherine Arcabascio has been a professor at the Shepard Broad College of Law since 1993, and currently teaches criminal law, criminal procedure, advanced criminal procedure and post-conviction litigation. Professor Arcabascio served as Associate Dean for International Programs from 2009-2017. From 2015-2017, she also served as the Director of the International Consortium for Global Legal Education.

Professor Arcabascio’s areas of scholarly interest expand beyond the subjects she currently teaches. They also include scientific evidence, clinical legal education and the transnational practice of law. She is a published author of various scholarly articles and recently co-authored a Criminal Law text published by Carolina Academic Press in 2016. Currently, she is co-writing an article entitled, "Freedom of Assembly in Support of Civic Innovation: Comparative Perspectives From Italy and the U.S." and also writing an article entitled, "The European Union's Mobility of Lawyers Requirement and the United States' Uniform Bar Exam: Rationales and Comparative Consequences." Professor Arcabascio also has been a guest speaker at numerous national and international conferences, including a presentation in Rome, Italy in June 2013 on the expansion of the U.S. clinic model to European law schools.

Additionally, Professor Arcabascio is the co-founder of the Florida Innocence Project, a pro bono organization that was dedicated to representing individuals who maintained that they were wrongfully convicted. The work of that organization and volunteer Shepard Broad College of Law students resulted in two exonerations in the State of Florida.

Before joining the faculty at Shepard Broad College of Law, she worked as an assistant district attorney in Brooklyn, New York and as a litigation associate at the law firm of Shutts & Bowen in Miami, Florida. Professor Arcabascio received her J.D. from Boston College Law School, her B.A. from New York University and is admitted to practice in both New York and Florida.