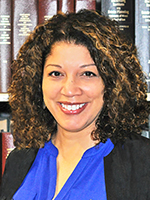 Olympia Duhart is Professor of Law and Director of the Legal Research and Writing ("LRW") Program at the Shepard Broad College of Law at Nova Southeastern University. Professor Duhart teaches LRW I, LRW II, Constitutional Law I, Constitutional Law II, and Women & the Law. She is an elected member of the Board of Governors for the Society of American Law Teachers. She serves on the Board of Advisors for the Institute for Law Teaching and Learning, the Advisory Board for the LexisNexis Publications Advisory Board, and is a member of the Legal Writing Institute and the Association of Legal Writing Directors. She is a coach for the Moot Court Society. She was also appointed to serve on the Grievance Committee for the 17th Circuit “D” for the Florida Bar. Professor Duhart was the Co-President of the Society of American Law Teachers (SALT) from 2014 – 2016 with Professor Ruben Garcia of the University of Nevada, Las Vegas. She continues to serve SALT as an elected member of the Board of Governors.

Before joining the faculty at NSU, Professor Duhart was a founding member of the Critical Skills Program at Nova. Previously, she worked as an attorney in the litigation department at Ruden McClosky. She also spent several years doing pro bono work with the Florida Innocence Project. Prior to attending law school, Professor Duhart taught in the English department at Marjory Stoneman Douglas High School in Parkland, Florida. Professor Duhart also worked as a staff reporter for The Miami Herald, where she covered municipal government and schools. Her articles have appeared in national print and in online magazines. She continues to contribute to blogs, including the NAACP Defenders Online, the SALTLAW blog The Huffington Post.

Professor Duhart’s scholarship focuses government accountability for historically marginalized groups of people. She has published extensively on Hurricane Katrina survivors. She has most recently written about Post-Traumatic Stress Disorder among veterans and members of the military. She also served as a member of the Editorial Board for Vulnerable Populations and Transformative Teaching: A Critical Reader. In addition, Professor Duhart has written in the areas of active learning, assessments, and teaching methods. She is the co-author (along with Thomas Baker, William Araiza Steve Friedland) of Skills and Values: Constitutional Law.