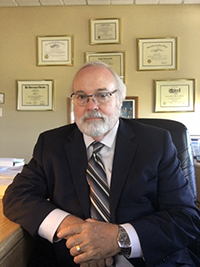 Gerald Morris has been an Adjunct Professor Law of the Nova Southeastern University Shepard Broad College of Law since 1992. He currently teaches the Health Law survey course,the Health Law Workshop and occasionally teaches other health-law-related courses. He also serves as an adjunct professor in connection with the NSU online Masters in Health Law program for non-lawyers.

Mr. Morris graduated from LeMoyne College in Syracuse, New York in 1973 with a Bachelor of Arts Degree. In 1977 he graduated "With Honors"(16th in his class) from the Nova University Law Center (now known as the Nova Southeastern University Shepard Broad College of Law) in Fort Lauderdale. He also received an LL.M. Degree in Health Law from the University of Houston Law Center in December 2002.

Adjunct Professor Morris is a member of the Florida Bar. He has been Board Certified in Health Law by the Florida Bar since August 1995. He was named to Who's Who in American Law in the 2004-2005 Edition and since including the 2011-2012 Edition, as well as nominated for Who's Who in America for 2005-2006. He was also recently named an NSU Law Center Adjunct Professor of the Year.

On a full-time basis, Mr. Morris serves as the General Counsel for Holy Cross Hospital and its related entities in Fort Lauderdale, Florida. He has been the in-house legal advisor for the organization since 1992. With nearly 560 licensed beds and over 3,000 FTEs (including a network of nearly 150 employed physicians in over 25 offices), as well as a home health service, an outpatient clinic and ambulatory surgery center, and other related entities, the organization is one of the largest health care providers in the area. It is the only religiously affiliated not-for-profit health care system in Broward County.

Prior to going in-house, Mr. Morris was in private practice with several law firms in Fort Lauderdale. His practice was predominantly general litigation and appeals, corporate law, commercial transactions with an emphasis on the evolving health law field. His legal practice and scholarship encompasses a wide range of health law topics.

In connection with his Health Law LL.M. program he submitted papers on parental rights relating to end-of-life decisions affecting minor children; the rights of human research subjects when clinical studies are terminated before completion, and his LL.M. thesis paper was on the subject of telemedicine and a proposal for overcoming the impediments to cross-border practice by health care professionals. Adjunct Professor Morris wrote a chapter published in 2005 on "Access to Medical Records" for the Encyclopedia of Forensic and Legal Medicine published by Elsevier, Ltd. Since 2003 he has regularly written an Ethics Roundtable column for the Journal of Terminal Oncology and its successor publications including the American Journal of Hospice & Palliative Care and the American Journal of Hospice and Palliative Medicine.

Currently Adjunct Professor Morris is researching aspects of the regulations pertaining to human subject research, health care reform, and the potential benefits of Six Sigma and other process improvement techniques on the practice of law and legal services. Adjunct Professor Morris is a member of the Florida Bar Health Law Section and has been a member of other health law professional organizations. He is a past Chairman of the Health Care Committee of the Greater Fort Lauderdale Chamber of Commerce. He has written on health law topics and has lectured extensively. Adjunct Professor Morris is also active in a number of civic, professional and other organizations and serves on the Board of Governors of the Shepard Broad College of Law of Nova Southeastern University.