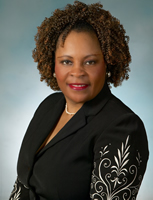 Florence Shu-Acquaye is a professor of law and a faculty member of Shepard Broad College of Law since 2000. She teaches Business Entities, Contracts, UCC: Sales, International Sales of Goods & Arbitration, Negotiable Instruments, and Comparative Corporate Governance. She also teaches in the Master’s in Health Law program (M.HL), where she has supervised over 70 student papers on various topics. In addition, she has developed and taught a course in the Master’s in Education Law (M.S. Ed.L).

Professor Shu-Acquaye holds an LL.B and Maîtrise (post-graduate diploma) (both with honors) from the University of Yaoundé, an LL.M from Harvard Law School, and a J.S.M and a J.S.D from Stanford Law School. While on sabbatical in the fall of 2006, she worked in Cameroon with the Society for Women and AIDS in Africa (SWAA), an African organization dedicated to addressing the problems faced by women with HIV/AIDS. Examples of her activities during her stay include: reviewing a proposed Model Law on STD/HIV/AIDS for West and Central Africa; reviewing an “Avant Projet de Loi Fixant Les Droits et Obligations Des Personnes Vivant avec Le VIH/SIDA” (proposed Law on the Rights and Obligations of Persons living with HIV/AIDS); reviewing, with recommendations, the implementation of some articles of the United Nations Convention on the Elimination of all Forms of Discrimination Against Women (CEDAW) in Cameroon. Based on these experiences, she then co-authored the book, “Women, the Law and HIV/AIDS: A Conundrum for the Legislature in Africa?"(Vandeplas Publishing (2008)), which further underscored her desire to draw attention to the epidemic in Africa. Professor Shu-Acquaye was a recipient of the In Focus magazine’s Quiet Storm Achievement Award on August 25, 2007, for her work with the Society for Women and AIDS in Africa. The following month this achievement was acknowledged and praised in a personal letter from the Supreme Court of Florida. During her 2015 sabbatical, she continued working with SWAA and amongst several other things, lobbied NGOs and government officials for a concrete follow up plan for the adoption of the Draft Law on HIV/AIDS in Cameroon. She participated in the training of Youths on Sexuality and created a basic guidance manual to assist SWAA Centre and other organizations on how to receive people with HIV/AIDS who come to their Centre/organization for assistance.