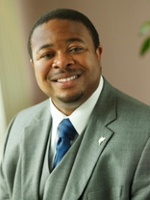 Professor Imoukhuede holds a J.D. from the Georgetown University Law Center, where he served as President of the Student Bar Association and was awarded the Dean’s Certificate for Outstanding Service.  He holds a B.A. in Economics from Northwestern University where he was awarded the Golden Bear Award for Financial Acumen.  Professor Imoukhuede has taught U.S. Constitutional law, an advanced course on constitutional law and theory, contracts, Administrative Law, and an international law course overseas.  Professor Imoukhuede researches fundamental rights as duties under the U.S. Constitution. He has presented his academic research across the nation including at UCLA, UNLV, and the University of Illinois, as well as overseas in Athens, Greece and Rome, Italy.

Professor Imoukhuede’s education and homeland security research address unmet constitutional obligations of government.  His article, The Fifth Freedom: The Constitutional Duty to Provide Public Education is a compelling argument on the fundamental U.S. Constitutional duty to provide public education.  Freedom from Ignorance: The International Duty to Provide Public Education, is equally powerful, arguing that public education is an international human right that the U.S. ought to recognize and protect. Education Rights and The New Due Process, published the Indiana Law Review, delineates how an educated citizenry required for liberty and democracy, and the absence of education renders these ideals devoid of meaning for all but the economically privileged and socially advantaged.

Before joining the Shepard Broad College of Law’s faculty, Professor Imoukhuede served as Investigative Counsel for the U.S. House of Representatives Committee on Homeland Security.  There he investigated the operations of the Department of Homeland Security and drafted legislation and committee reports while also advising the Members of Congress on Homeland Security law and policy.

In addition to his federal government service, Professor Imoukhuede was an attorney in the Chicago offices of a large U.S. law firm, specializing in complex commercial litigation and business regulation.  He represented several Fortune 100 clients in major antitrust, pharmaceutical, and franchising disputes.

Professor Imoukhuede is a member of the Bars of Illinois, the District of Columbia, and the Northern District of Illinois.  He is a proud Eagle Scout.